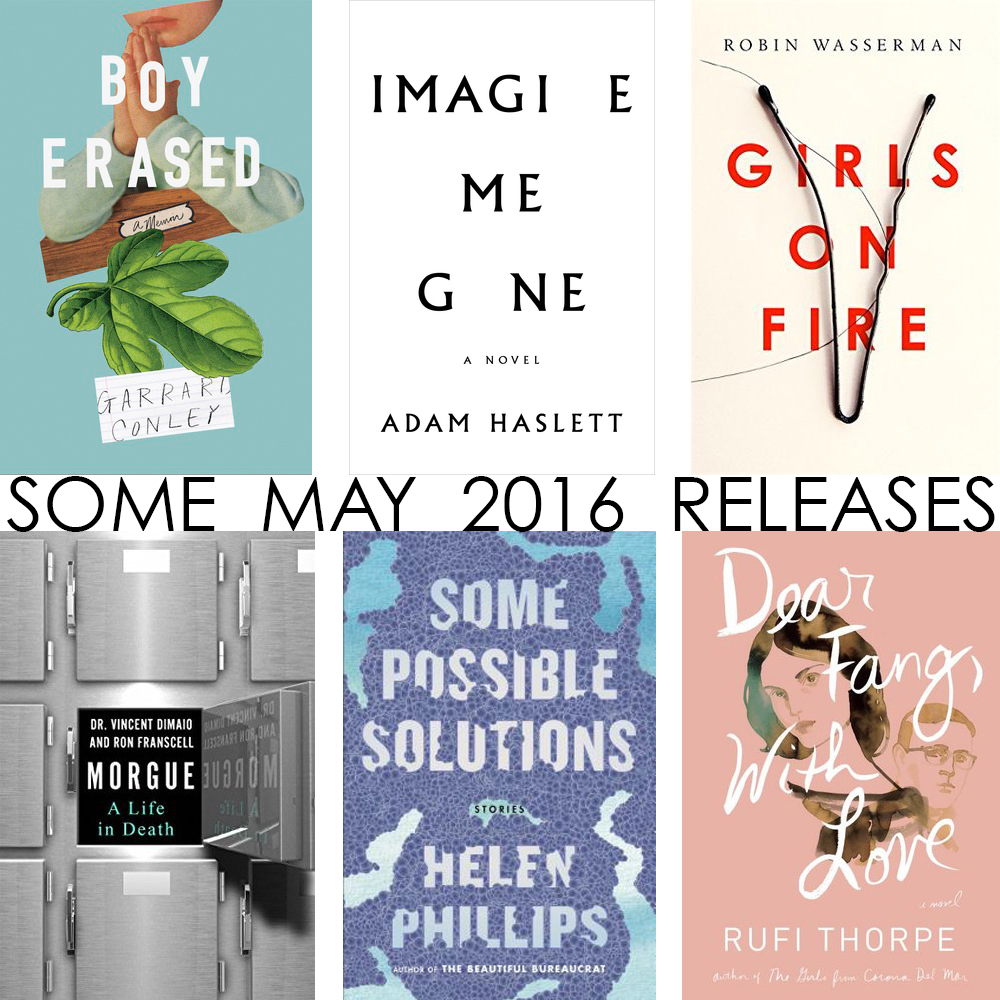 Another month, another cracking array of newly and soon-to-be published books. With the usual mixture of fiction and non-fiction, if you find yourself in need of a new read this month, here are nine that I think could be worth looking into.

Boy Erased: A Memoir by Garrad Conley • May 10th 2016, Riverhead Books
The son of a Baptist pastor and deeply embedded in church life in small town Arkansas, as a young man Garrard Conley was terrified and conflicted about his sexuality. When he was nineteen, he was outed to his parents, and was forced to make a life-changing decision: either agree to attend a church-supported conversion therapy program that promised to “cure” him of homosexuality; or risk losing family, friends, and the God he had prayed to every day of his life. Through an institutionalized Twelve-Step Program heavy on Bible study, he was supposed to emerge heterosexual, ex-gay, cleansed of impure urges and stronger in his faith in God for his brush with sin. Instead, even when faced with a harrowing and brutal journey, Garrard found the strength and understanding to break out in search of his true self and forgiveness. By confronting his buried past and the burden of a life lived in shadow, Garrard traces the complex relationships among family, faith, and community. At times heart-breaking, at times triumphant, this memoir is a testament to love that survives despite all odds.

Imagine Me Gone by Adam Haslett • May 3rd 2016, Little Brown
When Margaret's fiancé, John, is hospitalized for depression in 1960s London, she faces a choice: carry on with their plans despite what she now knows of his condition, or back away from the suffering it may bring her. She decides to marry him. Imagine Me Gone is the unforgettable story of what unfolds from this act of love and faith. At the heart of it is their eldest son, Michael, a brilliant, anxious music fanatic who makes sense of the world through parody. Over the span of decades, his younger siblings, the savvy and responsible Celia and the ambitious and tightly controlled Alec, struggle along with their mother to care for Michael's increasingly troubled and precarious existence.

Girls on Fire by Robin Wasserman • May 5th 2016, Little Brown
The story of Hannah and Lacey and their obsessive teenage female friendship so passionately violent it bloodies the very sunset its protagonists insist on riding into, together, at any cost. Opening with a suicide whose aftermath brings good girl Hannah together with the town's bad girl, Lacey, the two bring their combined wills to bear on the community in which they live. Unconcerned by the mounting discomfort that their lust for chaos and rebellion causes the inhabitants of their parochial small town, they think they are invulnerable. But Lacey has a secret, about life before her better half, and it's a secret that will change everything...

LaRose by Louise Erdrich • May 10th 2016, Corsair
North Dakota, late summer, 1999. Landreaux Iron stalks a deer along the edge of the property bordering his own. He shoots with easy confidence but when the buck springs away, Landreaux realizes he’s hit something else, a blur he saw as he squeezed the trigger. When he staggers closer, he realizes he has killed his neighbor’s five-year-old son, Dusty Ravich. The youngest child of his friend and neighbor, Peter Ravich, Dusty was best friends with Landreaux’s five-year-old son, LaRose. Horrified at what he’s done, the recovered alcoholic turns to an Ojibwe tribe tradition, the sweat lodge, for guidance, and finds a way forward.

Following an ancient means of retribution, he will give LaRose to the grieving Peter and Nola. LaRose is quickly absorbed into his new family. Plagued by thoughts of suicide, Nola dotes on him, keeping her darkness at bay. As the years pass, LaRose becomes the linchpin linking the Irons and the Raviches, and eventually their mutual pain begins to heal. But when a vengeful man with a long-standing grudge against Landreaux begins raising trouble, hurling accusations of a cover-up the day Dusty died, he threatens the tenuous peace that has kept these two fragile families whole. Inspiring and affecting, LaRose is a powerful exploration of loss, justice, and the reparation of the human heart, and an unforgettable, dazzling tour de force from one of America’s most distinguished literary masters.

Sweetbitter by Stephanie Danler • May 24th 2016, Knopf
"Let's say I was born when I came over the George Washington Bridge..." This is how we meet unforgettable, twenty-two year old Tess. Shot from a mundane, provincial past, she's come to New York to look for a life she can't define, except as a burning drive to become someone and to belong somewhere. After she stumbles into a coveted job at a renowned Union Square restaurant, we spend the year with her as she learns the chaotic, punishing, privileged life of a "backwaiter," on duty and off. Her appetites—for food, wine, knowledge, and every kind of experience—are awakened. And she's pulled into the magnetic thrall of two other servers, a handsome bartender she falls hard for, and an older woman she latches onto with an orphan's ardor. These two and their enigmatic connection to each other will prove to be Tess's hardest lesson of all. Sweetbitter is a story of discovery, enchantment, and the power of what remains after disillusionment

The View from the Cheap Seats: Selected Non-Fiction by Neil Gaiman • May 31st, Headline
The View from the Cheap Seats draws together, for the first time ever, myriad non-fiction writing by international phenomenon and Sunday Times bestselling author Neil Gaiman. From Make Good Art, the speech he gave at the University of the Arts in Philadelphia that went viral, to pieces on artists and legends including Terry Pratchett, Lou Reed and Ray Bradbury, the collection offers a glimpse into the head and heart of one of the most acclaimed writers of our time. 'Literature does not occur in a vacuum. It cannot be a monologue. It has to be a conversation' Welcome to the conversation.

Neil Gaiman fled the land of journalism to find truths through storytelling and sanctuary in not needing to get all the facts right. Of course, the real world continued to make up its own stories around him, and he has responded over the years with a wealth of ideas and introductions, dreams and speeches. The View From the Cheap Seats will draw you in to these exchanges on making good art and Syrian refugees, the power of a single word and playing the kazoo with Stephen King, writing about books, comics and the imagination of friends, being sad at the Oscars and telling lies for a living.

Morgue: A Life in Death by Dr. Vincent DiMaio and Ron Franscell • May 17th, St Martin's Press
In this clear-eyed, gritty, and enthralling narrative, Dr. Vincent Di Maio and veteran crime writer Ron Franscell guide us behind the morgue doors to tell a fascinating life story through the cases that have made Di Maio famous. Beginning with his street-smart Italian origins in Brooklyn, the book spans 40 years of work and more than 9,000 autopsies, and Di Maio's eventual rise into the pantheon of forensic scientists. One of the country's most methodical and intuitive criminal pathologists will dissect himself, maintaining a nearly continuous flow of suspenseful stories, revealing anecdotes, and enough macabre insider details to rivet the most fervent crime fans.

Some Possible Solutions by Helen Phillips • May 31st 2016, Henry Holt and Co.
What if your perfect hermaphrodite match existed on another planet? What if you could suddenly see through everybody's skin to their organs? What if you knew the exact date of your death? What if your city was filled with doppelgangers of you? Forced to navigate these bizarre scenarios, Phillips' characters search for solutions to the problem of how to survive in an irrational, infinitely strange world. In dystopias that are exaggerated versions of the world in which we live, these characters strive for intimacy and struggle to resolve their fraught relationships with each other, with themselves, and with their place in the natural world. We meet a wealthy woman who purchases a high-tech sex toy in the shape of a man, a rowdy, moody crew of college students who resolve the energy crisis, and orphaned twin sisters who work as futuristic strippers. With Phillips' characteristic smarts and imagination, we see that no one is quite who they appear. By turns surreal, witty, and perplexing, these marvelous stories are ultimately a reflection of our own reality and of the big questions that we all face. Who are we? Where do we fit?

Dear Fang, With Love by Rufi Thorpe • May 24th 2016, Knopf
Lucas and Katya were boarding school seniors when, blindingly in love, they decided to have a baby. Seventeen years later and after years of absence, Lucas is newly involved in his daughter Vera's life. But after Vera suffers a terrifying psychotic break at a high school party, Lucas takes her to Lithuania, his grandmother's homeland, for the summer. Here, in the city of Vilnius, Lucas hopes to save Vera from the sorrow of her diagnosis. As he uncovers a secret about his grandmother, a Home Army rebel who escaped Stutthof, Vera searches for answers of her own. Why did Lucas abandon her as a baby? What really happened the night of her breakdown? And who can she trust with the truth? Skillfully weaving family mythology and Lithuanian history with a story of mental illness, inheritance, young love and adventure, Rufi Thorpe has written a wildly accomplished, stunningly emotional book.