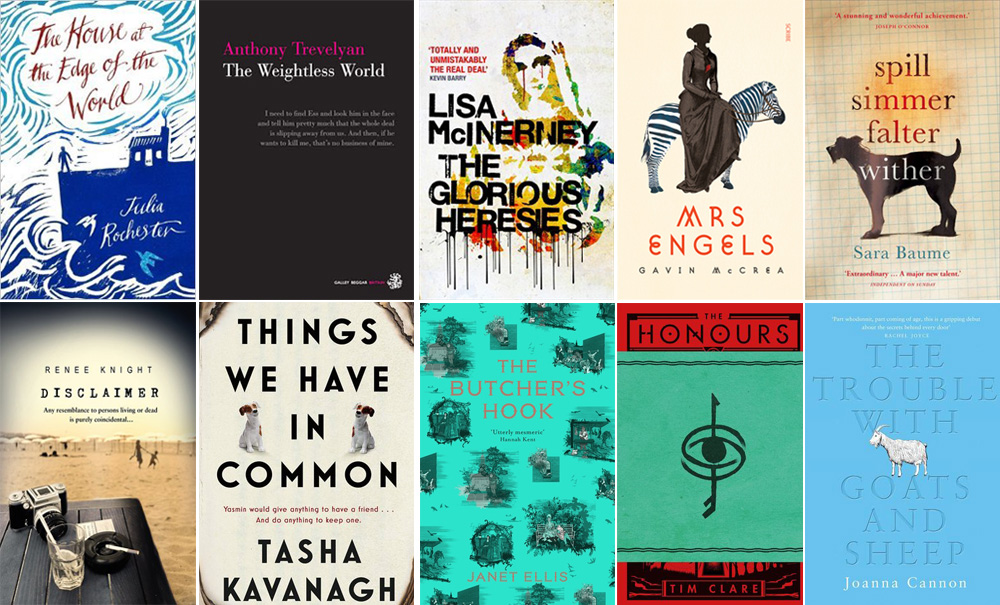 The Desmond Elliott Prize is an annual award for a first novel written in English and published in the UK. The award is named after literary agent and publisher Desmond Elliott, a charismatic and witty man who drank only champagne and always crossed the Atlantic on Concorde. When choosing the winner the three judges will look for a compelling narrative, arresting character and vivid writing.

Disclaimer by Renée Knight Doubleday
'Finding a mysterious novel at her bedside plunges documentary filmmaker Catherine Ravenscroft into a living nightmare. Though ostensibly fiction, The Perfect Stranger recreates in vivid, unmistakable detail the terrible day Catherine became hostage to a dark secret, a secret that only one other person knew--and that person is dead. Now that the past is catching up with her, Catherine’s world is falling apart. Her only hope is to confront what really happened on that awful day even if the shocking truth might destroy her.'

Things We Have in Common by Tasha Kavanagh Canongate
'Yasmin would give anything to have a friend… And do anything to keep them. The first time I saw you, you were standing at the far end of the playing field. You were looking down at your brown straggly dog, your mouth going slack as your eyes clocked her. Alice Taylor. I was no different. I’d catch myself gazing at the back of her head in class, at her thick fair hair swaying between her shoulder blades. If you’d glanced just once across the field, you’d have seen me standing in the middle on my own looking straight at you, and you’d have gone back through the trees to the path quick, tugging your dog after you. You’d have known you’d given yourself away, even if only to me. But you didn’t. You only had eyes for Alice.'

The Butcher’s Hook by Janet Ellis Two Roads
'Georgian London. Summer 1763. Anne Jaccob is coming of age, the daughter of a wealthy merchant. When she is taken advantage of by her tutor — a great friend of her father’s — and is set up to marry a squeamish snob named Simeon Onions, she begins to realize just how powerless she is in Georgian society. Anne is watchful, cunning, and bored. Her saviour appears in the form of Fub, the butcher’s boy. Their romance is both a great spur and an excitement. Anne knows she is doomed to a loveless marriage to Onions and she is determined to escape with Fub and be his mistress. But will Fub ultimately be her salvation or damnation? And how far will she go to get what she wants?'

The Honours by Tim Clare Canongate
'1935. Norfolk. War is looming in Great Britain and the sprawling country estate of Alderberen Hall is shadowed by suspicion and paranoia. Thirteen-year-old Delphine Venner is determined to uncover the secrets of the Hall's elite society, which has taken in her gullible mother and unstable father. As she explores the house and discovers the secret network of hidden passages that thread through the estate, Delphine uncovers a world more dark and threatening than she ever imagined. With the help of head gamekeeper Mr Garforth, Delphine must learn the bloody lessons of war and find the soldier within herself in time to battle the deadly forces amassing in the woods.'

The Trouble with Goats and Sheep by Joanna Cannon Borough Press
'England, 1976. Mrs Creasy is missing and The Avenue is alive with whispers. As the summer shimmers endlessly on, ten-year-olds Grace and Tilly decide to take matters into their own hands. And as the cul-de-sac starts giving up its secrets, the amateur detectives will find much more than they imagined…'

The House at the Edge of the World by Julia Rochester Viking
'Shortly after their eighteenth birthday, twins Morwenna and Corwin’s father dies accidentally. With him go the last vestiges of their childhood, and soon after both move away to start their separate adult lives. Corwin sets off on a fifteen-year itinerant tour of rainless, war-torn countries while Morwenna leads a quiet life as a bookbinder in east London. When their beloved grandfather, Matthew, grows ill, the pull of home is too strong to resist and they find themselves back in the family house in Devon. Over the past fifty years, Matthew has meticulously painted every important event in the family’s life on top of an ordnance survey chart. Part record and part legend, the map has been a subject of fascination to Morwenna and Corwin for as long as they can remember. But is there a deeper meaning hidden among the tiny pictures of shipwrecks, asps and farting devils, and could it lead them closer to what really happened to their father all those years ago? '

The Weightless World by Anthony Trevelyan Galley Beggar Press
'Steven Strauss is just where he doesn’t want to be: on a ‘business trip’ to India with his boss Raymond Ess, the charismatic and chaotic founder of Resolute Aviation. Lately the company has fallen on hard times. Steven and his fellow employees have accepted that they’re all going to lose their jobs. But Ess is determined to save his beloved company, and to this end he’s devised an audacious rescue plan. He claims that during his recent travels he has come across a man who is willing to sell his remarkable invention: an antigravity machine. Now, with Steven in tow, Ess has returned to India planning to buy the machine, to bring it to market and thereby right all wrongs, recover all losses, restore all reputations. Steven knows it is madness. He knows antigravity machines don’t exist. He knows also that last year Raymond Ess had a spectacular mental breakdown. However in India, Steven will find there is much that he doesn’t know and there is no one he can trust, not even himself. In a lost place on a distant plain he will come to understand that there is far more at stake on this trip than he ever imagined.'

The Glorious Heresies by Lisa McInerney John Murray
'One messy murder affects the lives of five misfits who exist on the fringes of Ireland's post-crash society. Ryan is a fifteen-year-old drug dealer desperate not to turn out like his alcoholic father Tony, whose obsession with his unhinged next-door neighbour threatens to ruin him and his family. Georgie is a prostitute whose willingness to feign a religious conversion has dangerous repercussions, while Maureen, the accidental murderer, has returned to Cork after forty years in exile to discover that Jimmy, the son she was forced to give up years before, has grown into the most fearsome gangster in the city. In seeking atonement for the murder and a multitude of other perceived sins, Maureen threatens to destroy everything her son has worked so hard for, while her actions risk bringing the intertwined lives of the Irish underworld into the spotlight . . .'

Mrs Engels by Gavin McCrea Scribe
'Very little is known about Lizzie Burns, the illiterate Irishwoman who was the longtime lover of Frederick Engels, co-author of The Communist Manifesto. In Gavin McCrea’s first novel, she is finally given a voice, one that won’t easily be forgotten.'

Spill Simmer Falter Wither by Sara Baume Windmill
'A misfit man finds a misfit dog. Ray, aged fifty-seven, ‘too old for starting over, too young for giving up’, and One Eye, a vicious little bugger, smaller than expected, a good ratter. Both are accustomed to being alone, unloved, outcast – but they quickly find in each other a strange companionship of sorts. As spring turns to summer, their relationship grows and intensifies, until a savage act forces them to abandon the precarious life they’d established, and take to the road.'

Have you read any titles from this longlist?