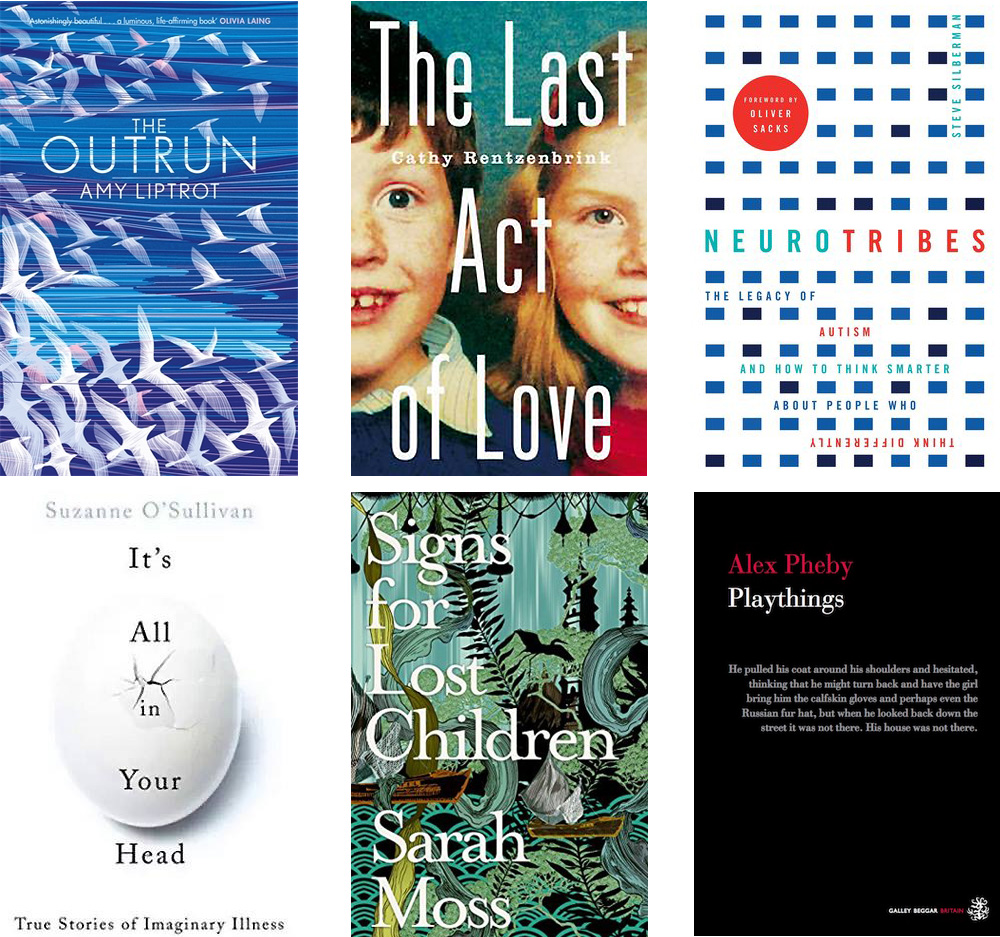 I officially have literary prizes coming out of my ears, and although I could go on (The Carnegie & Kate Greenaway awards, for example) this will be my final long/shortlist post for at least a little while. The shortlist for the 2016 Wellcome Book Prize 'showcases the breadth and depth of our encounters with medicine through six exceptional works of fiction and non-fiction'. This shortlist particularly caught my attention because at I've been recommended or seen pieces about at least four of the six very recently and I think this may be a sign that I should delve in.

The Outrun by Amy Liptrot
Amy was shaped by the cycle of the seasons, birth and death on the farm, and her father's mental illness, which were as much a part of her childhood as the wild, carefree existence on Orkney. But as she grew up, she longed to leave this remote life. She moved to London and found herself in a hedonistic cycle. Unable to control her drinking, alcohol gradually took over. Now thirty, she finds herself washed up back home on Orkney, standing unstable at the cliff edge, trying to come to terms with what happened to her in London.

The Last Act of Love by Cathy Rentzenbrink
In the summer of 1990 Cathy Rentzenbrink's brother Matty was knocked down by a car on the way home from a night out. He was left in a permanent vegetative state. Over the following years, Cathy and her parents took care of Matty - they built an extension onto the village pub where they lived and worked; they talked to him, fed him, bathed him, loved him. But there came a point at which it seemed the best thing they could do for Matty, and for themselves, was let him go. With unflinching honesty Cathy describes the unimaginable pain of losing her brother and the decision that changed her family's lives forever.

Neurotribes by Steve Silberman
What is autism? A lifelong disability, or a naturally occurring form of cognitive difference akin to certain forms of genius? In truth, it is all of these things and more—and the future of our society depends on our understanding it. A groundbreaking book that upends conventional thinking about autism and suggests a broader model for acceptance, understanding, and full participation in society for people who think differently.

It's All in Your Head by Suzanne O'Sullivan
Consultant neurologist Dr Suzanne O’Sullivan takes us on a journey through the very real world of psychosomatic illness. She takes us from the extreme, from paralysis, seizures and blindness, to more everyday problems such as tiredness and pain. Meeting her patients, she encourages us to look deep inside the human condition. There we find the secrets we are all capable of keeping from ourselves, and our age-old failure to credit the intimate and extraordinary connection between mind and body.

Signs for Lost Children by Sarah Moss
Only weeks into their marriage a young couple embark on a six-month period of separation. Tom Cavendish goes to Japan to build lighthouses and his wife Ally, Doctor Moberley-Cavendish, stays and works at the Truro asylum. As Ally plunges into the institutional politics of mental health, Tom navigates the social and professional nuances of late 19th century Japan. With her unique blend of emotional insight and intellectual profundity, Sarah Moss builds a novel in two parts from Falmouth to Tokyo, two maps of absence; from Manchester to Kyoto, two distinct but conjoined portraits of loneliness and determination.

Playthings by Alex Pheby
He pulled his coat around his shoulders and hesitated, thinking that he might turn back and have the girl bring him the calfskin gloves and perhaps even the Russian fur hat, but when he looked back down the street it was not there. His house was not there.

Well, Playthings & The Outrun are probably going to have to be a part of my next big book purchase list - I have a feeling it's going to be an expensive one.