New To The Shelf. 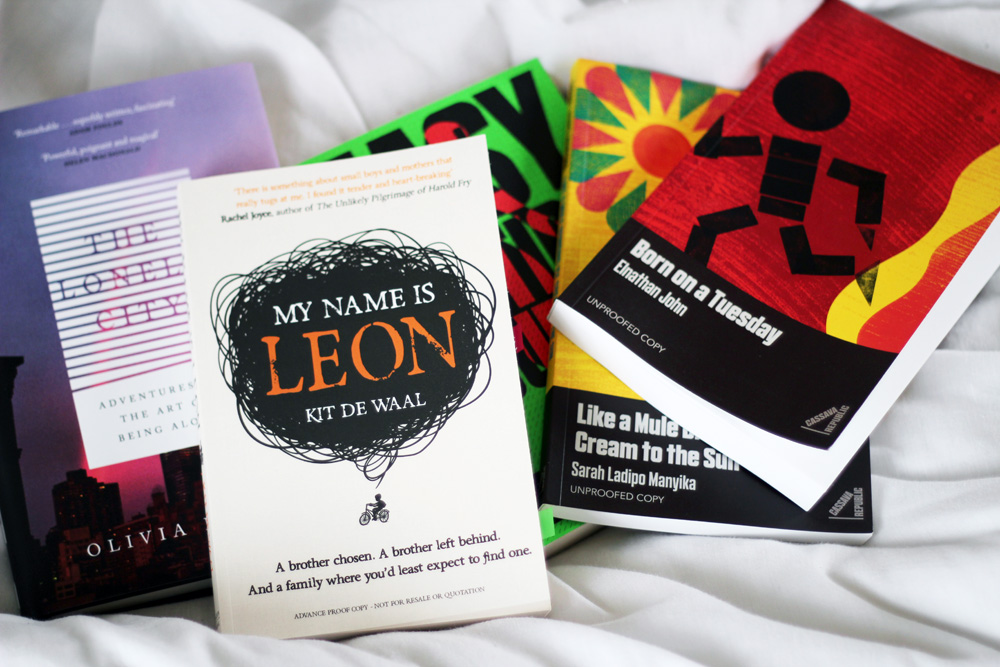 Oh that new book joy, there simply aren't any words to adequately describe it - especially when you find yourself so incredibly excited about every single one. I don't tend to do many 'haul' posts, but I couldn't wait to talk about these books and I've already read a couple of them, so here we go... 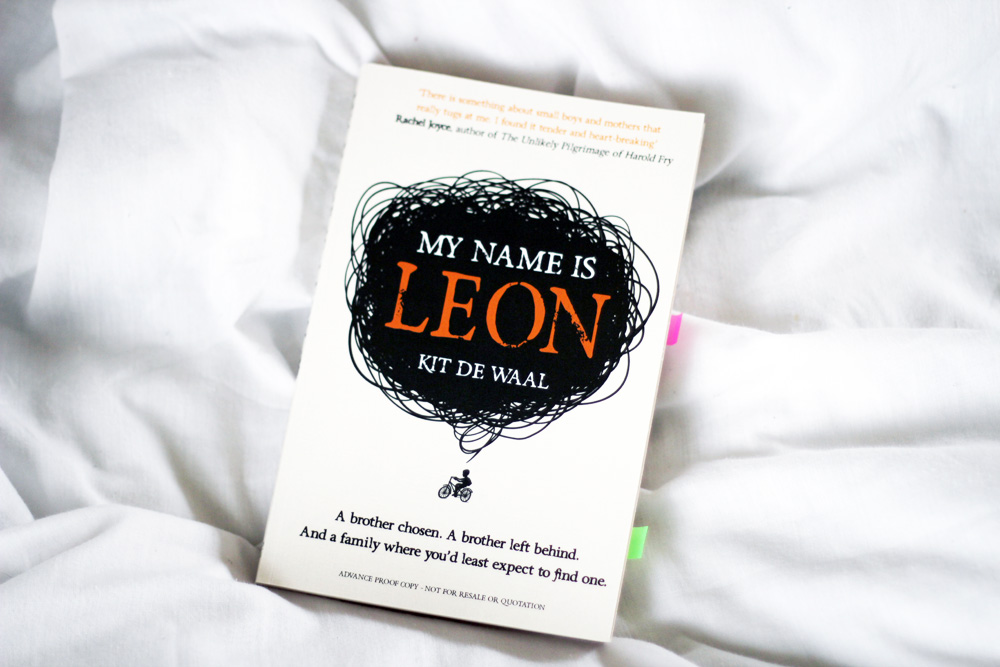 My Name is Leon by Kit de Waal
Penguin very kindly sent me a proof copy of this quietly touching novel about a Leon, a nine year old boy, growing up in the early 1980s. When Leon's Mother finds herself unable to cope Leon and Jake, despite Leon's very best efforts, are taken into care. Soon Jake is adopted but Leon isn't. Because Jake is white and Leon is not. A story of love, fierce bonds between siblings, trying to comprehend unbearable loss and how we can find family when we least expect it. Leon and Maureen are my new heroes. This is published in early June and I think it's wonderful. 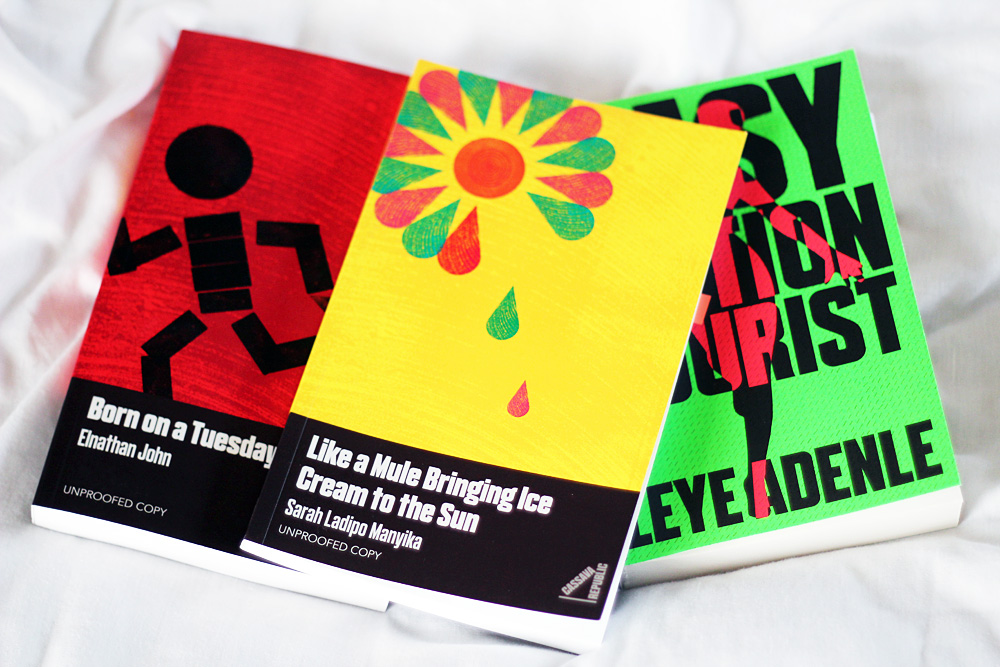 Cassava Republic Press are dedicated to building a new body of African writing that links writers across different times and spaces and they believe that contemporary African prose should be rooted in African experience in all its diversity. I, shamefully, do not read as diversely as I should and so these three titles, all published on April 1st, are going to introduce me to new voices and stories I simply need to hear.

Born on a Tuesday by Elnathan John


'In northwestern Nigeria, Dantala lives among a gang of street boys and during an election, the boys are paid by the Small Party to cause trouble. When their attempt to burn down the opposition’s local headquarters ends in disaster, Dantala must run for his life, leaving his best friend behind. He makes his way to a mosque that provides him with food, shelter, and guidance. With his quick aptitude and modest nature, Dantala becomes a favored apprentice to the mosque’s sheikh. Before long, he is faced with a terrible conflict of loyalties, as one of the sheikh’s closest advisors begins to raise his own radical movement. When bloodshed erupts in the city around him, Dantala must decide what kind of Muslim—and what kind of man—he wants to be. Told in Dantala’s naïve, searching voice, this astonishing debut explores the ways in which young men are seduced by religious fundamentalism and violence.'

I'm only a few pages in and it's already clear that this is going to be a terribly sad story. Even the dedication is moving 'For the boys who will never be known, and the girls who become numbers - stars without a name'. I think this might be a very brave and important novel.


Like a Mule Bringing Ice Cream to the Sun by Sarah Ladipo Manyika
Picking this up almost as soon as I opened the parcel, I found myself immediately drawn into Morayo's world and I found myself unable to put it down. At almost seventy five, she has retained her zest for life, adores the freedom her vintage car gives her and arranges her books by which characters she believes should be talking to each other. This is a subtle story, quietly meandering as we discover a little about the people, past and present, who have touched Morayo's life, uncovering feelings of deep friendship, loss and ageing.


'A compelling crime novel set in contemporary Lagos. Guy Collins, a British hack stumbles by chance into the murky underworld of the city. A woman's body is discarded by the side of a club and Collins is picked up by the police as a potential suspect. After experiencing the unpleasant realities of a Nigerian police cell, he is rescued by Amaka, a Pam Grier-esque Blaxploitation heroine with a saintly streak. As Collins discovers more of the darker aspects of what makes Lagos tick - including the clandestine trade in organs - he also falls slowly for Amaka. Little do they realise how the body parts business is wrapped up in the power and politics of the city.'

I always find myself thinking that I don't read enough crime novels but I never seem to do anything about fixing it, so this is perfect. I also have a feeling my mum might be pinching this one from me very soon, she does love a good crime novel and knows far more about the genre than I do, so I'll be looking forward to hearing what she thinks too. 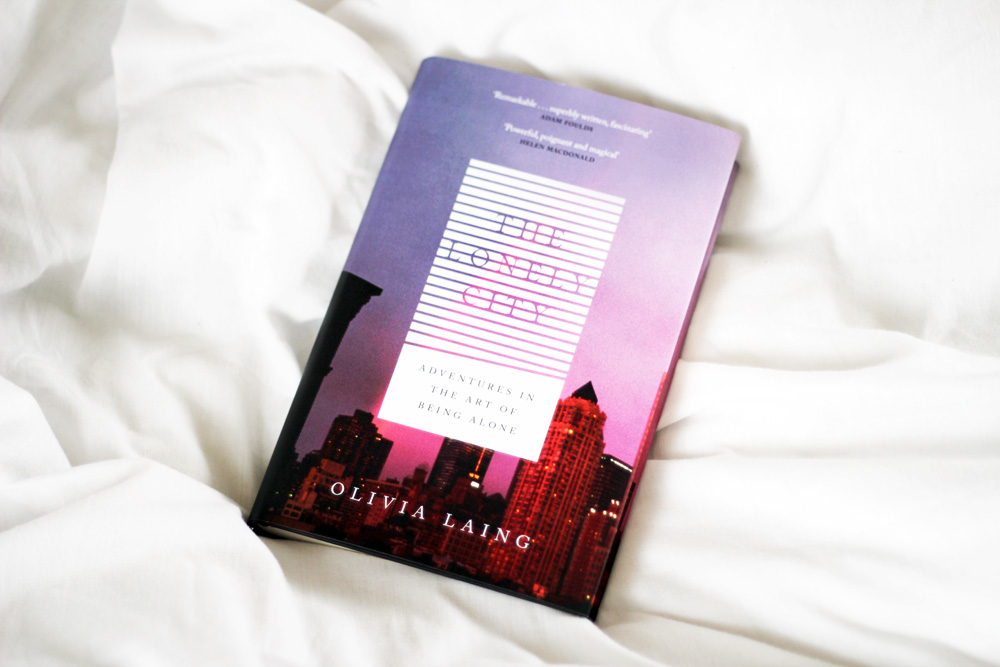 The Lonely City by Olivia Laing
I've already mentioned this title a few times in previous posts, it featured in my Published This Month: March 2016 roundup and has been a book that has seemingly been following me around - I keep seeing it everywhere and I cannot wait to dive in.


•
Have you added any new books to your shelf recently?

Labels: new to the shelf