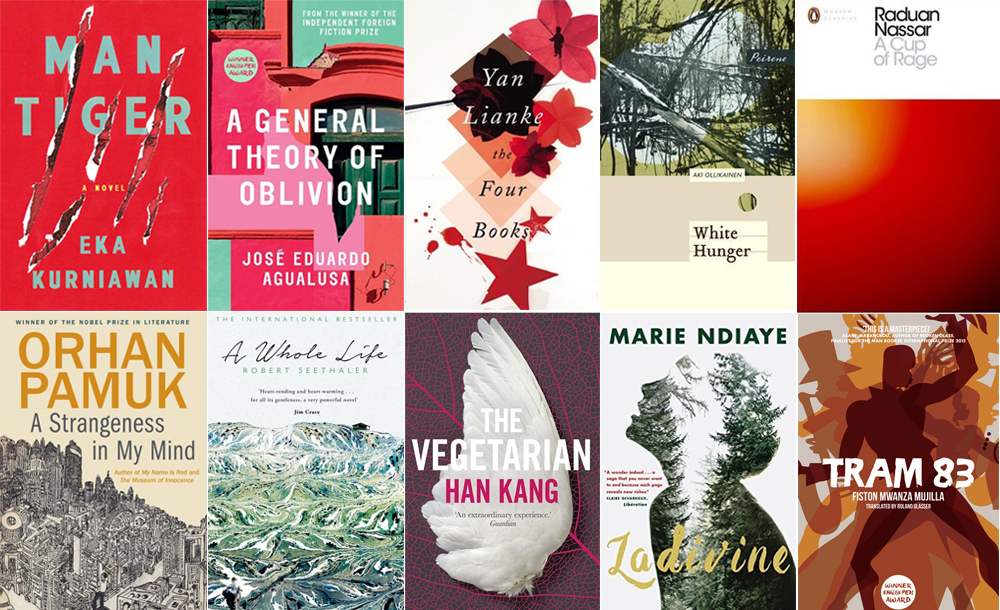 
Keeping up with literary prizes isn't something I've done before, but as I'm keen to at least try to keep up with what's happening in the literary world I've been actively taking more of an interest. The Man Booker International Prize has caught my eye in particular because I definitely don't read enough translated fiction - I've only actually heard of two of the titles on the list. The rest are completely new to me and that's exciting!

I think Elena Ferrante's Neopolitan Quartet might be following me around. It keeps popping up everywhere and I'm becoming tempted to at least try the first book even though it's not necessarily something that I would usually gravitate towards. The only other title I've heard of before is The Vegetarian by Han Kang and it's on my list for whenever I cave and absolutely have to place a book order. Sorry in advance to my bank balance. 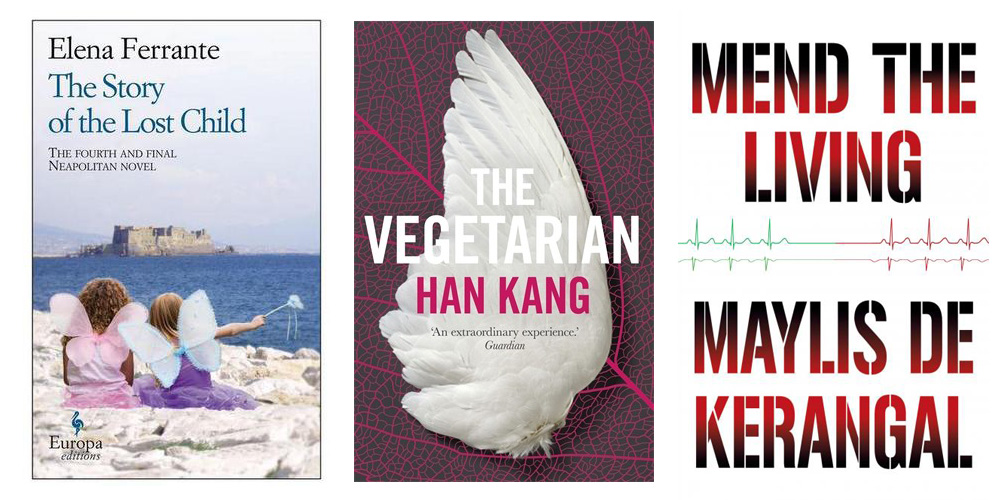 The Story of the Lost Child by Elena Ferrante, translated by Ann Goldstein
The final part of Ferrante's Neopolitan quartet. I don't want to delve any further into the plot in case I spoil the previous books.

The Vegetarian by Han Kang, translated by Deborah Smith
A disturbing, beautifully composed narrative told in three parts, this is an allegorical novel about modern day South Korea, but also a story of obsession, choice and our faltering attempts to understand others.

Mend the Living by Maylis de Kerangal, translated by Jessica Moore
Weaving from hospital corridors to the wild waves of the Atlantic, from narrow Parisian streets to the Algerian countryside, from the most intimate details of grief to universal considerations of science, compassion and humanity. This is the story of a heart transplant, centred around Simon Limbeau, the boy whose heart is given, and his family. 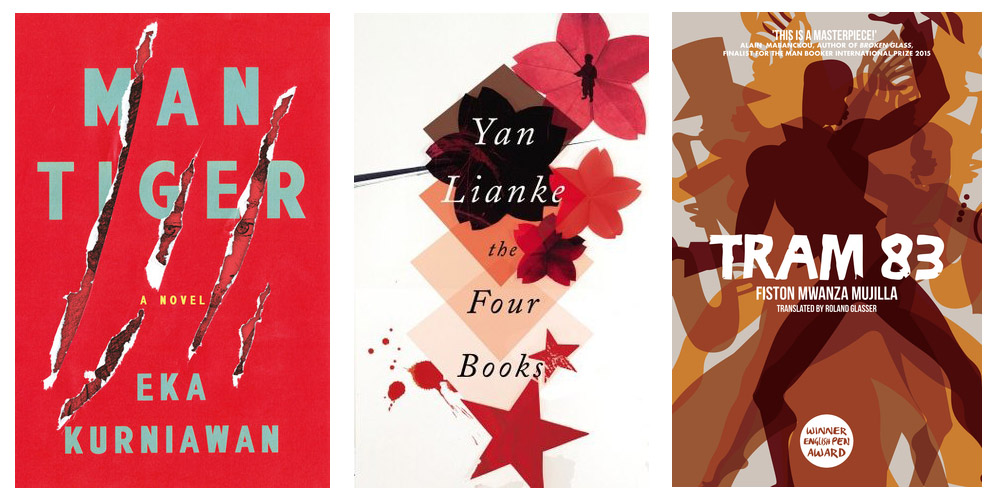 Man Tiger by Eka Kurniawan, translated by Labodalih Sembiring
Set in an unnamed town near the Indian Ocean, Man Tiger tells the story of two interlinked and tormented families, and of Margio, an ordinary half-city half-rural youngster who also happens to be half-man half-supernatural white tiger.

The Four Books by Yan Lianke, translated by Carlos Rojas
A powerful and daring novel detailing the dog-eat-dog psychology inside a labour camp for intellectuals during Mao's Great Leap Forward. This mythical and sometime surreal tale cuts to the bone in its portrayal of the struggle between authoritarian power and man's will to prevail against the darkest odds through camaraderie, love, and faith.

Tram 83 by Fiston Mwanza Mujilla, translated by Roland Glasser
Tram 83 plunges the reader into the atmosphere of a gold rush; cynical, sometimes comic and colourfully exotic. An observation of human relationships in a world that has become a global village. 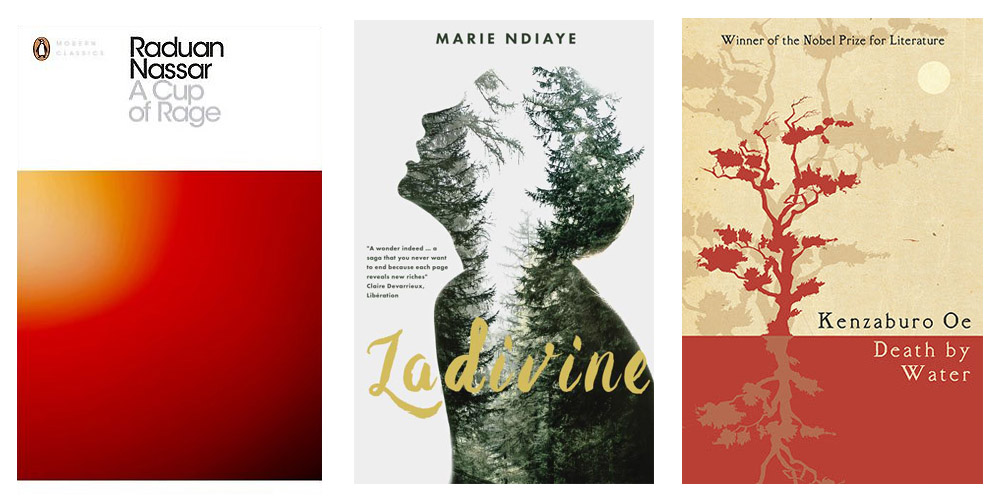 A Cup of Rage by Raduan Nassar, translated by Stefan Tobler
A pair of lovers spend the night together. The next day they proceed to destroy each other. Amid vitriolic insults, cruelty and warring egos, their sexual adventure turns into a savage power game. From one of Brazil's most infamous modernist writers, A Cup of Rage explores alienation, the desire to dominate, and the wish to be dominated.

Ladivine by Marie NDiaye, translated by Jordan Stump
A mesmerising and heart-stopping psychological tale of a trauma that ensnares three generations of women, Ladivine is a harrowing and subtly crafted novel of a woman captive to a secret shame.

Death by Water by Kenzaburō Ōe, translated by Deborah Boliner
In Death by Water, Kenzaburō Ōe's reocurring protagonist and literary alter-ego returns to his home village in search of a red suitcase fabled to hold documents revealing the details of his father's death during WWII. An exquisite examination of resurfacing national and personal trauma, and the ways that storytelling can mend political, societal and familial rifts.

White Hunger by Aki Ollikainen, translated by Emily Jeremiah and Fleur Jeremiah
1867: the year of a devastating famine in Finland. Marja, a farmer's wife from the north, sets off on foot with her two young children. Their goal is St Petersburg where people say there is bread. Others are also heading south, just as desperate to survive.

A Strangeness in my Mind by Orhan Pamuk, translated by Ekin Oklap
The story of Melvut, the woman to whom he wrote three years' worth of love letters, and their life in Istanbul. What matters more in love: what we wish for, or what our fate has in store? Do our choices dictate whether we will be happy or not, or are these things determined by things beyond our control?

A Whole Life by Robert Seethaler, translated by Charlotte Collins
Told with beauty and tenderness, this is the story of Andreas Egger, a man who knows every path and peak of his mountain valley, his livelihood. His story is one of man's relationship with an ancient landscape, of the value of solitude, the arrival of the modern world, and above all, of the moments, great and small, that make us who we are.

A General Theory of Oblivion by Jose Eduardo Agualusa, translated by Daniel Hahn
On the eve of Angolan independence an agoraphobic woman named Ludo bricks herself into her apartment for 30 years. Almost as if we’re eavesdropping, the history of Angola unfolds through the stories of those she sees from her window.

Have you read any of the books on the longlist?