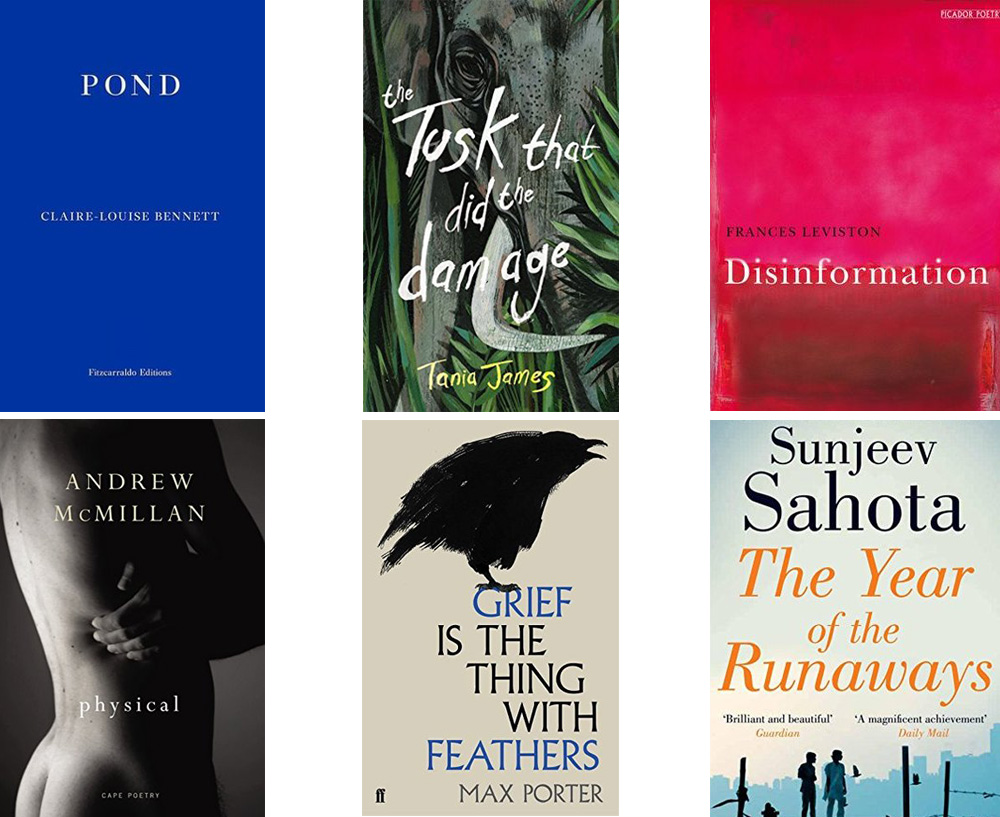 The annual International Dylan Thomas Prize is one of the most prestigious awards for young writers, aimed at encouraging raw creative talent worldwide and celebrating and nurturing international literary excellence. The Prize seeks to ensure that readers today will have the chance to savour the vitality and sparkle of a new generation of young writers.

The mix of poetry, short stories and novels on the shortlist is incredibly interesting. Grief is the Thing with Feathers and Pond have been on my radar for a little while, and this is all the reminder I need to track down a copy of each. Physical and Disinformation sound intense and stunning, so they're certainly on my to-read list now.

There is a copy of The Year of the Runaways still sitting on my shelf from last year after I bought a bundle of the shortlisted Man Booker titles from The Book People. I had already read A Little Life and Satin Island but I made the mistake of reading the winner, A Brief History of Seven Killings - which is superbly written but was ultimately a bit of a slog for me to get through - before the rest, and I haven't regained the desire to revisit them quite yet. I have a bit of a love/hate thing with the Booker but I will pick up Runaways very soon.


'Feverish and forthright, Pond is an absorbing chronicle of the pitfalls and pleasures of a solitudinous life told by an unnamed woman living on the cusp of a coastal town. Broken bowls, belligerent cows, swanky aubergines, trembling moonrises and horrifying sunsets, the physical world depicted in these stories is unsettling yet intimately familiar and soon takes on a life of its own. Captivated by the stellar charms of seclusion but restless with desire, the woman’s relationship with her surroundings becomes boundless and increasingly bewildering. Claire-Louise Bennett’s startlingly original first collection slips effortlessly between worlds and is by turns darkly funny and deeply moving.'


The Tusk that did the Damage by Tania James


'A tour de force set in South India that plumbs the moral complexities of the ivory trade through the eyes of a poacher, a documentary filmmaker, and, in a feat of audacious imagination, an infamous elephant known as the Gravedigger.

Orphaned by poachers as a calf and sold into a life of labour and exhibition, the Gravedigger breaks free of his chains and begins terrorizing the countryside, earning his name from the humans he kills and then tenderly buries. Manu loses his cousin to the Gravedigger’s violence and is drawn, with his wayward brother Jayan, into the sordid, alluring world of poaching. Emma is a young American working on a documentary with her college best friend, who witnesses the porous boundary between conservation and corruption and finds herself in her own moral gray area: a risky affair with the veterinarian who is the film’s subject. As the novel hurtles toward its tragic climax, these three storylines fuse into a wrenching meditation on love and betrayal, duty and loyalty, and the vexed relationship between man and nature.'


'We often credit poetry as a kind of truth-telling, but it can also be an agent and a vessel of disinformation: in the course of making its proofs and confessions, it also seeks to persuade and seduce by any means it can. Leviston uses both sides of poetry's tongue to address one of the key questions of the age: how have we come to know what we think we know? In the title poem, a woman preparing for a child's birthday party suddenly glimpses the invisible screen of false data behind which she lives - and her own complicity in its power. Many of the poems are concerned with ruined or abandoned structures, dismembered and disappearing bodies, constructed and deconstructed identities; behind them lie the false gods who manipulate the streams of information with which we must navigate the contemporary world. Disinformation challenges us to rescue our idea of identity from that mass of glib truth and persistent falsehood - and proposes how we might begin to think of poetry itself as a means to that end.'


'Raw and urgent, these poems are hymns to the male body – to male friendship and male love – muscular, sometimes shocking, but always deeply moving. We are witness here to an almost religious celebration of the flesh: a flesh vital with the vulnerability of love and loss, to desire and its departure. In an extraordinary blend of McMillan’s own colloquial Yorkshire rhythms with a sinewy, Metaphysical music the poems in this first collection confront what it is to be a man and interrogate the very idea of masculinity. This is poetry where every instance of human connection, from the casual encounter to the intimate relationship, becomes redeemable and revelatory.'

Grief is the Thing with Feathers by Max Porter


'In a London flat, two young boys face the unbearable sadness of their mother's sudden death. Their father, a Ted Hughes scholar and scruffy romantic, imagines a future of well-meaning visitors and emptiness.

In this moment of despair they are visited by Crow - antagonist, trickster, healer, babysitter. This self-described sentimental bird is attracted to the grieving family and threatens to stay until they no longer need him. As weeks turn to months and physical pain of loss gives way to memories, this little unit of three begin to heal.'


The Year of the Runaways by Sanjeev Sahota


'The Year of the Runaways tells of the bold dreams and daily struggles of an unlikely family thrown together by circumstance.

Thirteen young men live in a house in Sheffield, each in flight from India and in desperate search of a new life. Tarlochan, a former rickshaw driver, will say nothing about his past in Bihar. Avtar has a secret that binds him to protect the chaotic Randeep. Randeep, in turn, has a visa-wife in a flat on the other side of town: a clever, devout woman whose cupboards are full of her husband's clothes, in case the immigration men surprise her with a call. Sweeping between India and England, and between childhood and the present day, this generous, unforgettable novel is a story of dignity in the face of adversity and the ultimate triumph of the human spirit.'

Have you read any of these titles?