January was a really good reading month, which I'm really glad about because I know it's likely that the next few probably aren't going to be the best. But that's okay too. I have set a goal for the year but I'm keen to not really focus on it too much because I'm very much a mood reader. Sometimes I want to read a lot and other times I don't want to pick up a book for a week or so.

Anyway without anymore rambling, here are the books I read in January... 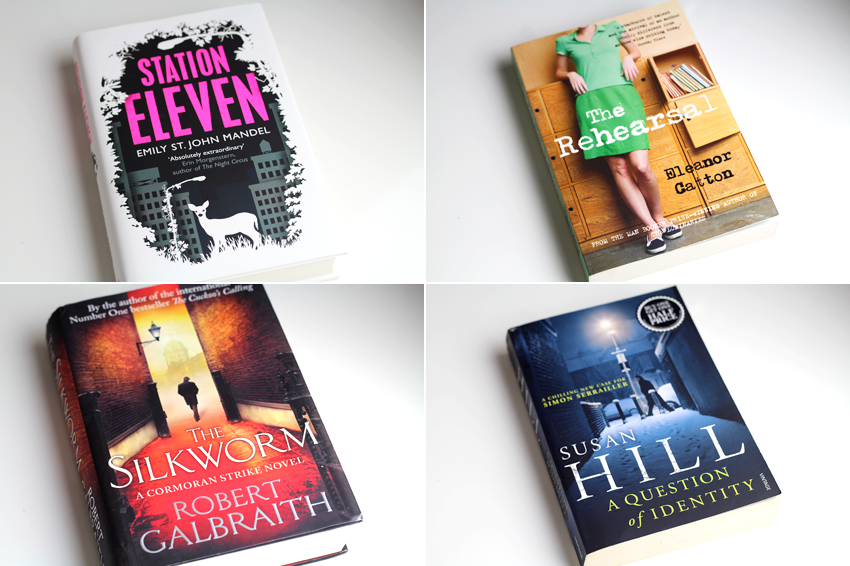 Station Eleven by Emily St John Mandel | ***
A post-apocalyptic novel that offers so much more. There's friendship and art and what it means to be alive. It's wonderful. Mandel is such a brilliant storyteller, she gives just enough without ever revealing too much.

The Rehearsal by Eleanor Catton | ***
A sex scandal breaks in a high school, jolting a group of teenage girls into becoming far more self aware than they have ever been before. Add in a local theatre group dramatising the scandal and you're left with a complicated storyline; I would expect nothing less from Eleanor Catton. It was certainly an experience, maybe a little more into the pretentious territory than I'd rather go though.

The Silkworm by Robert Galbraith | ****
Robert sure does know how to write a cracking crime novel. As I expected I sped though, determined to reach the end so I could find out how everything tied together. The clues are there waiting to be pieced together, inviting the reader to really get involved. Very much looking forward to the next in the series already!

A Question of Identity by Susan Hill | **
From a great crime novel to a not-so-great one. I know that not all crime novels are about piecing things together, but everything was much too obvious without any other strands of the storyline offering any more substance. I guessed the ending a few chapters in and I was just a little disappointed overall because I was expecting more. 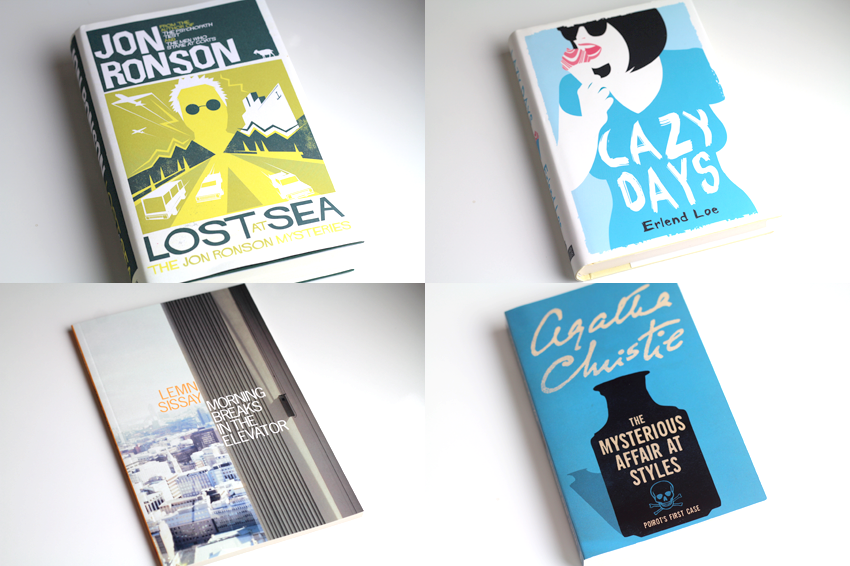 Lost At Sea by Jon Ronson | ***
A collection of essays and articles by Jon Ronson, the author of the psychopath test, and all round interesting chap. As with all collections some pieces were more interesting than others, but I liked it overall. I particularly liked the little insight into Stanley Kubrick and all the research he put into each of his projects. I believe Jon made a documentary about Kubrick's boxes of research so I'll have to try and watch that soon.

Lazy Days by Erlend Loe | **
Telemann and his wife are on holiday in Germany, a place his wife loves but he does not. Telemann loves the theatre and Nigella Lawson. It's an incredibly strange but very fast read. I think silly is the best word to describe it, but I'm not sure if it's meant to be silly or if it's meant to be something more.

Morning Breaks in the Elevator by Lemn Sissay | ****
A small but perfectly formed collection of poetry. One I will read again and again.

The Mysterious Affair At Styles by Agatha Christie | ***
My first Poirot novel and certainly not my last. It was as delightful as I had hoped for. There's a lot of sass from Poirot, a murder of course, Hastings being a little bit useless as usual and lots of clues. Looking forward to picking up another one next month! 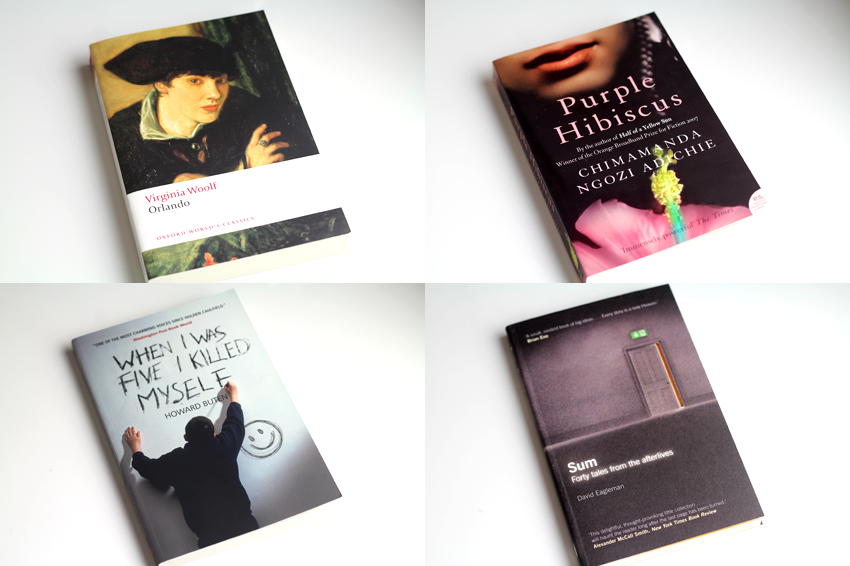 Orlando by Virginia Woolf | **
I'm so disappointed. I don't think Virginia and I are friends. I thought I would adore her work but this was a real struggle to get through. Maybe it's one I'll appreciate at another time, but at the moment I don't think I have the same connection with her writing as so many others do, of which I'm a little bit envious.

Purple Hibiscus by Chimamanda Ngozi Adichie | ***
My first Adichie novel and she took me on a real journey, on which I experienced almost every emotion possible. She writes speech so naturally, it felt so real and very raw. I'll be picking up another novel by Adichie very soon.

When I Was Five I Killed Myself by Howard Buten | ***
A short novel that packs a big punch. The thing that has stuck with me since reading is the disconcerting atmosphere, the build up to the unveiling of the act that Burton has committed to find himself in a Children's Trust Centre. A clever novel, one to pick up if the blurb interests you.

Sum: Forty Tales from the Afterlives by David Eagleman | ****
A brilliant collection of 40 very short tales from the afterlives. In one you are forced to live with different versions of yourself that represent what you could have been. In another the afterlife contains only the people you remember. An interesting celebration of the power of the human imagination. 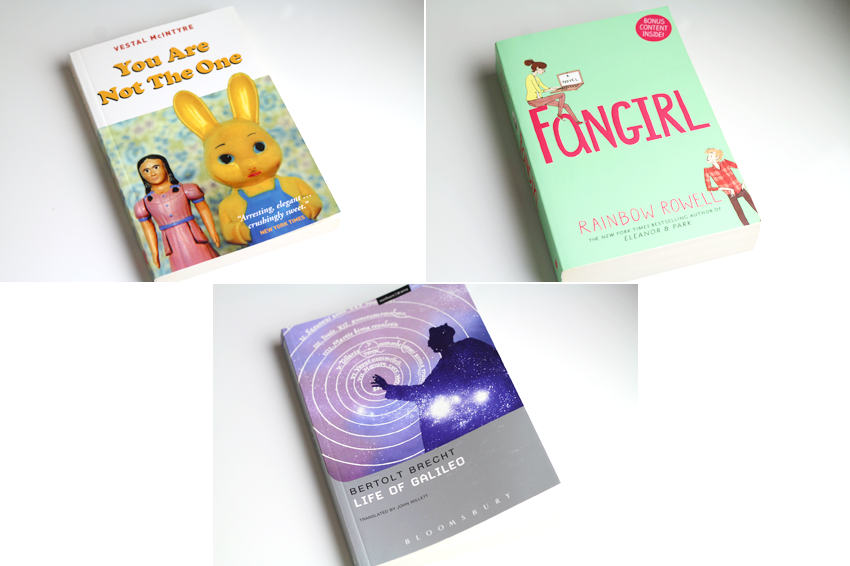 You Are Not The One by Vestal McIntyre | ****
One of the best short story collections I've ever read. Each of the eight stories are smart, funny and full of charmingly flawed characters that feel so real. One story in particular has changed the way I now see car washes.

Fangirl by Rainbow Rowell | ***
This was a re-read for me because I was curious to see if I'd like it as much now as I did last year. I gave it 5 stars last year and 3 this time. I think it was exactly what I needed at the time, but now I can see its flaws a little more clearly. It's interesting how our opinions can change in a relatively short amount of time.

Life Of Galileo by Bertolt Brecht | ***
This is on my University reading list this term and I almost skipped it in favour of a poetry option, but I'm so glad I didn't. Brecht is brilliant, so much so I'm doing a risky last minute change of question for my next essay so I can write about this.

Was January a good reading month for you?

Labels: read in january wrap up