Would You Rather: Book Edition 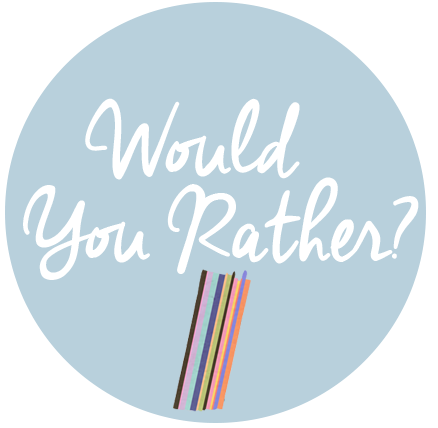 1. Would you rather read only trilogies or only stand alone novels?
Stand alone novels will always be my ultimate favourite. Sometimes trilogies end with everything too neatly tied up at the end, or are so much longer than they need to be and I suppose I just like having a complete story in a single book.

2. Would you rather read only male or female authors?
I don't think I could ever choose.

3. Would you rather shop at Barnes & Noble or Amazon?
If I had an unlimited book buying budget, I would always shop in actual bookshops. You can't beat the joy that comes from wandering the shelves and discovering something unexpected.

4. Would rather books became films or TV shows?
Films, I think. My pet peeve with TV shows is that they always drag things out for too long and I end up losing interest. So I think I would prefer having to have bits left out of a film to having things added into a TV show.

5. Would you rather read 5 pages a day or 5 books a week?
Five books a week. More is more!

6. Would you rather be a professional reviewer or an author?
I would love to write a book even though realistically I probably only have one good (maybe mediocre) novel in me. Maybe one day!

7. Would you rather read your favourite 20 books over & over or only read books you've never read before?
The joy that starting a new book brings is something I couldn't live without.

8. Would you rather be a librarian or a bookseller?
I may hold distant dreams of opening my own independent bookshop one day, so a bookseller for sure.

10. Would you rather read only physical books or ebooks?
I'm all about the physical books and so far haven't been able to get used to reading ebooks.